“Do or Do Not: There is No Try” ~ Yoda – Star Wars, The Empire Strikes Back 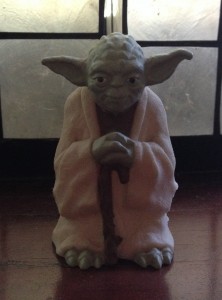 The yoga teacher is teaching a ballet bar class. She utilizes her skills where she can. Movement is beautiful in so many forms. Grace and understanding come through countless actions.

She enters the university’s room being vacated by an aerobics class. The slender aging aerobics teacher is no bigger than a girl; no body fat. She glistens with sweat. Her shirt has a message: Big Fat Writing.

Do the students look defeated or does the yoga teacher imagine that the humid air is perfumed with hope and sorrow?

That shirt raised my shackles.

First of all, why do you have to do better in aerobics class?

But that shirt wasn’t about aerobics class and either was my reaction. How about letting the students enjoy the fruit of today’s labor before thinking it wasn’t as good as it could be? How much better it could be, might be a dream but might also be a nightmare born of a Puritan ethic. Good people never give up. Hard work is the key to the kingdom for eternity.

Do better is the unspoken universal mantra, isn’t it? Does anyone want to do worse?

Not even for a moment does

someone exist without acting.

Even against one’s will, one acts

We couldn’t do nothing even if we tried. And it might not be “nature- born” to best oneself with regularity but it is certainly bred into our culture where more is the mantra and better is mores’ companion.

“In the United States there’s a Puritan ethic and a mythology of success. He who is successful is good. In Latin countries, in Catholic countries, a successful person is a sinner”. Umberto Eco

Perhaps the idea of non-attachment, one of yoga’s most  confounding riddles has some merit here. Do your best; what you believe is the right thing to do. Then let the cards lie and move on. Don’t dawdle admiring your work. Don’t obsess about what went wrong. Move on. Go again. This “be in the moment” mentality may have been viewed as a way to stay sane when it was mentioned 400 years B.C.E in the Gita. (In other instances it was also viewed from an ascetic point of view; a renunciation point of view that one should not want things but act from selflessness though that is not the point of view here.)

I could rewrite this post for years knowing it could always be better. Or I can hit publish and move on. Better is an endless yearning. Better diminishes now. Better weakens me not by its potential but by its gloating over my accomplishments.

When you have the attention of people who believe you know more than them and you demand or imply they can be better even as they are negotiating what is possible in the present, you might make them crazy and we don’t need more crazy.  And by crazy I mean self loathing, anxious and insecure.

I’m teaching yoga to a woman who is wearing a different shirt. It says:

Atta girl. Hold your ground. She’s clearly given this some thought.

She has a heavy pressure night ahead of her and wants a restorative class. She’s fit; built like an Ashtangi. She has nervous energy so I pick slow and measured movement to serve her best. But even in that, directed to gently, slowly fall with gravity, she is straining, shaking with effort.

For yoga students it’s not uncommon to hear the message to do better. I consider how often I use the word ‘just’ when explaining a posture.

In Feldenkrais class the word just means ‘only’. It means do one thing and do it thoughtfully. Thank you Feldenkrais teachers for twenty years under your tutelage. But what do yoga students hear? Perhaps they hear the word “simply” when there’s nothing simple about it. Perhaps they associate that with the phrase “Just do it”. That’s a diminishing phrase for anyone who can’t just simply do it.

The phrase “just do it” is dismissive.It reminds me of breathing through pain in childbirth. It reminds me of yoga classes I’ve taken. I can breathe through pain. I have had children. I know how to ignore my weaknesses. I can push myself beyond my endurance. I can do better.

I can do better.

That is an uncomfortable feeling.

Discomfort is not normal: That’s a concept.

But we are so used to being uncomfortable. Maybe it is normal.

I used to think that teaching yoga meant I had to teach people to deal with the discomfort of life. I was used to being uncomfortable.

Breaking patterns can be gruesome but I have broken some of mine.

Do one thing at a time. Rejoice in your effort. Relax your bad self.

Tomorrow is another day.