Here is a lovely recipe from The Sprouted Kitchen. They look so darn good.

I thought it was worth sharing as the rain and safe shelter keep us home during this mysterious and nerve racking time.

It seems like I mostly bake and eat these past two weeks with a dash of yoga and dog walking to boot. I will make this with unbleached white flour and coconut flour as that is what I have here. I rarely follow recipes exactly anyway.
My favorite baking chocolate these days are Enjoy Life dark chocolate morsels.  The other day I used Whole Foods organic butter rounds with peanut butter sandwiched in between and dipped them in melted chocolate. Left them on the front porch to firm on a baking sheet with parchment paper. Heaven.
Anyway, The Sprouted Kitchen sent this out and if you like healthy baking you might go subscribe to them directly.
Happy Snacking,
Love, Hilary 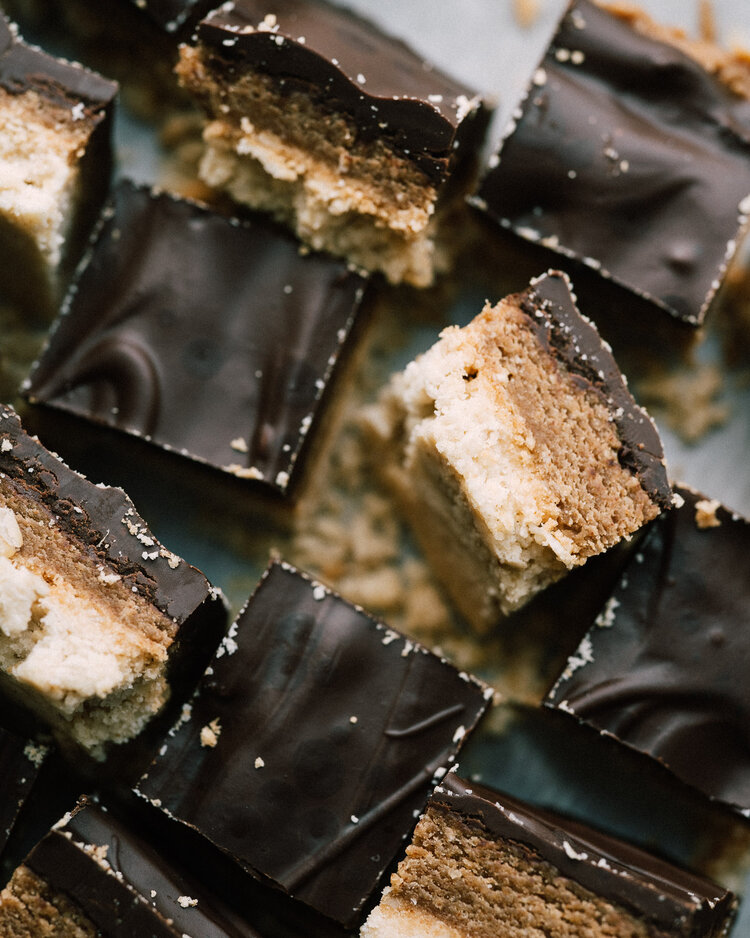 Line an 8” square dish with parchment paper for easy removal. Preheat the oven to 325’.

In a food processor, combine the coconut flour, almond flour, oats, coconut oil, maple, vanilla and salt and pulse a few times to combine. Don’t overdo it, just a few pulses. It should stick together when you press your fingers together. Press the shortbread layer into the bottom of the pan, getting an even layer all the way to the edges. Bake on the middle rack for 15-17 minutes until just toasty on top. Remove to cool.

In another bowl, stir together the nut butter and maple. The sweetener may make it seize a bit and that’s ok, we need it to be spreadable but firm. You can stir in a splash of hot water and stir it in if you can’t get the mixture to move. If it’s too runny, a sprinkle of coconut flour will also firm it up.

Over the cooled shortbread, spread the nut butter layer. Pop that in the fridge while you make the chocolate.

In a glass bowl over simmering water (double boiler method), add the roughly chopped chocolate and coconut oil. Stir until melted. Spread the chocolate over the nut butter layer. Let it cool down in the fridge for 15, then sprinkle the flaky salt over the top, and pop the whole situation in the fridge to chill for at least 30 minutes.

Remove the parchment sling and chop the bars into small squares. They’ll crumble a bit. They will keep stored in the fridge for up to two weeks.