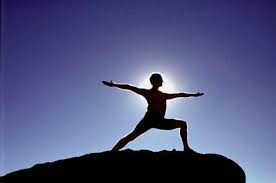 In his opening lecture on the Yoga Sutras, Edwin Bryant PhD, Professor of Hinduism at Rutgers University, discredited the idea of a devotional aspect to the text postulated by an attending teacher. He declared that the totality of the Sutras is a call to meditation and an invitation to renunciation rather than advice to dedicate oneself to anything outside oneself. He had begun by stating that one cannot study yoga philosophy too often as the significance of the content changes with perceptions based in life experience. This teacher took comfort she said, in the idea of channeling disturbances of the mind into devotion or bhakti. Bryant shut the notion down going so far as to say that the text including the eight limbs was simply dedicated to eliminating distraction from self involvement which seems an erudite view.

When the teacher cited a verse of the Bhagavad Gita to press her point Bryant made it clear that the Gita was not to be confused with the message of the Sutras. The Gita advocates duty and devotion to something outside oneself which is a direct departure from the attitude of isolation described in the Sutras.

Gita’s shadow danced when I set the class for Warrior II the next day.

God and War is a curious pairing without context. In the framework of modern and not so modern conflicts it’s business as usual and the business places God in awkward positions depending on whose God it is or on which side God stands. God and war in the Gita? I leave it to others to interpret as they wish but this day it called me to teach the posture Warrior II.

How do you prepare for a battle of the heart where the heart is the holder of love and desire and courage and fear? First, where do these things come from? They come from our ground, our base, our beliefs, our conditioning, our self interests, our impressions, our insecurity or security based on outside people or circumstances. We may not know ourselves well enough to understand and then we might go to battle based on emotion or based on circumstantial logic. How do we marry emotion and logic when we are a mix of things we do not know? We can know the body. We can see and feel a physical form. We can feel it best in relationship to something solidly unyielding. Here is the stance of the warrior in Warrior II.

Boots on the ground and back against the wall or waiting in the trenches? I chose the trenches.

Despite gravity, even when lying prone on the floor, the body does not easily surrender its entirety so force is required to create the relationship that results in tension best suited to the posture.

Lie and the floor; Round One:

~ Legs pinned as one

~Heels and thighs press the ground

~Tail belongs to the heels

~Inhale and press the ribs open

~Exhale to pin the navel to the spine and hold it

~Inhale into the circular space of the chest and upper back*

*Round two is the same but on the second inhale arms rise to the floor overhead and firm to draw more height to the ribs and the feet press downward against the tension of the navel band’s grip on the diaphragm. The body parts come together as one.

Two eyes take the senses as warriors rise to their feet. The forward arm points to a foe but what reason allows one to plunge the sword?

Boots on the ground and head back over the tail. Why does this connection matter? It brings a steadiness to the nerves. For those with more flexibility it is a touchstone and for those with less flexibility it asks the rest of the body to move into the places made evident in basic training on the floor.

And then in steadiness and solidness and readiness and commitment, before the foe appears, the nature of the warrior arises as the answer to a question:

What am I doing?

Why am I doing this?

The answer to the last two questions will change with perspective and circumstance. Ideally, who I am remains a familiar constant after a fashion.

If the warrior pose is done by rote and without understanding its purpose or if does not feel useful and it is performed by request despite these deficiencies it might point to the question of who am I.

This life is a battlefield. We are all warriors. We take the first breath. It is no longer given. Our duties change with time and circumstance. Our devotion is another matter.