What Does Karma Have to Do With Your Yoga Practice?

Karma describes the cycle of action creating a reaction which causes a further action. It is called the wheel of karma because it is a loop. It can indicate a lack of consciousness when the reactions do not reap positive change. 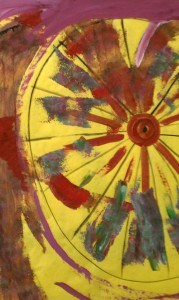 The Wheel Arises by Hilary

In your asana practice it can manifest as non-productive aggression. That aggression results in discomfort. Yet asana is described as a comfortable seat.

How do you manage karma in your yoga practice in a yoga class?

Then move within that form until it is comfortable. That is the reaction.

Extend yourself with your breath into the outer reaches of that form.

Adjust again and again until you are comfortable even for two breaths.

Hold the space in the pose because you have stability because you can do that now. Be in the pose and don’t push. The breath is all the action you need. Receive and release the breath. Do not force it. If your pose has a positive effect the movement of breath will be pleasing.

Recognize the sensation before you feel the need to shift again, because you will, because nothing but death is static.  Notice what ease feels like as the wheel of karma momentarily stops.