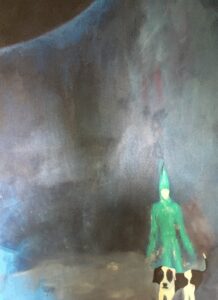 Or it increases it. Everything is the result of how you’re made and how you do things. And then there is how you are guided to manage these things. Organization, meaning how our body organizes itself, is key but we are mostly messy and subject to outside opinions of “cleanliness”. In yoga cleanliness is not described as the opposite of dirty but an inner shine. It is a component of a larger picture of contentment.

In the late eighties and nineties many of us yoga enthusiasts were taught to invite discomfort, to force ourselves past normal range of motion, to work till the breath was ragged and then work to control that breath. It was stimulating, emotionally revealing, challenging in the best of ways. It did feel like making diamonds from carbon. Yoga was young in the U.S.. We were young.

About 25 years ago I began to feel the effects of pushing my body to the limit. In fairness I’d been told by a rheumatologist that my ligaments lacked integrity and yoga was the worst thing my body could do. It would destroy me. I discounted that at a time when movement came so easily and yoga was a dance that satisfied me wholly.

I probably should have stuck to my own practice of dance incorporating yoga as that never hurt instead of feeling guilty as a newcomer to Nashville being given the popular title of “best” yoga teacher in a town that had a small circle of largely unknown yoga devotees teaching traditional yoga before I’d arrived. Instead I embarked on ten years of training with senior Iyengar teachers around the country who found in Nashville an eager consumer base of what they had to sell. If I couldn’t dissuade folks that I wasn’t teaching a practice that had thousands of years of history I would learn to do that too.

There was so much intelligence to that doctrine when taught by thoughtful teachers but the energy around much of it was a striving to physical perfection that was somewhat misguided for the masses because type A individuals who are largely attracted to that teaching pushed to the maximum.

Dance created as integrated movement partnered with music and the slow stretch of yoga creates glorious dynamic avenues for nervous systems. And dance can also be a punishment for those tied to perfection or outside opinion.

This triple A personality got me a bionic hip this year. I had rearranged myself, morphed my injured back and hip and shoulder for double digit years to avoid doctors. I was in a way self made and it had played itself out. I let myself get injured in the quest to perfection in the yoga room, my garden, my house, which of course never happened but I tried and beat my body like a tempest raged toddler with a rag doll.

It made me a better teacher, put me on the level of “tight” people, injured people, people who would never and could never cause themselves injury for the sake of experiencing what was on the far side of impossible.

It brought me back to Feldenkrais and Breema. It brought me forward to acceptance and a truer sense of life beyond the body.

If you know me, if you were a teacher learning alongside me, you are laughing because you saw me challenging those people. You know they singled me out and you know some disliked me. What you don’t know is that I challenged myself as well to rise to the level of a challenger on their turf and in the end I was the one who lost.

Why do I write this for you on my pages?

I reveal myself so you might learn something about yourself.

Because I am a yoga teacher.